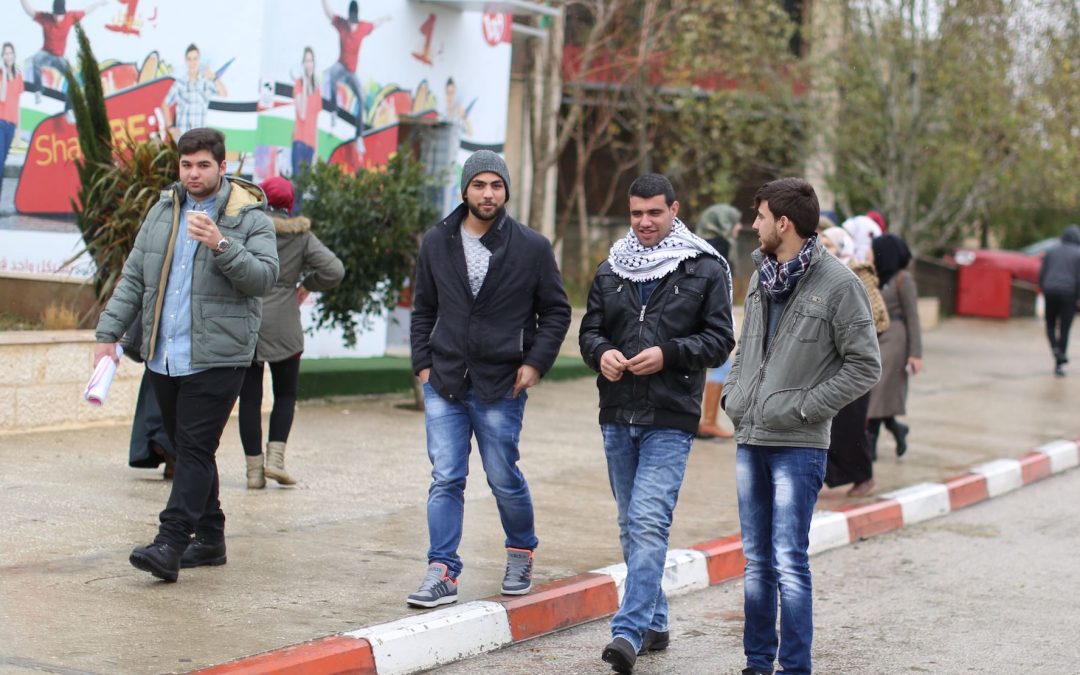 However, the first semester has been overshadowed by the Israeli government threatening to annex Palestinian territory to consolidate and formalise its grip over the West Bank.  Birzeit University has responded by offering 80 new scholarships to students from areas acutely affected by annexation, and Palestinians visiting from Jerusalem and the Jordan Valley and other areas with no access to higher education were full of enthusiasm during their campus tour.

But there is still uncertainty about the level of face-to face-teaching that will take place this semester, which began in September.  Since the beginning of the Covid-19  lockdown in March in the occupied West Bank and Gaza Strip, Birzeit University has joined other higher education institutions across the globe in suspending face-to-face teaching.  Classes have continued remotely online and special arrangements made so that existing students could take their examinations. The Palestinian Ministry of Education recently issued a statement annoucing that undergraduate freshers and students requiring the use of laboratories may be allowed access to campus. However, the universities will be monitoring the situation closely and may need to curb face-to-face instruction altogether.

For some students the advent of lockdown has offered a few tangible benefits.  Some described saving precious money by not having to pay for student dormitory accommodation, while another current student said that she saved at least two hours a day avoiding the queue to cross Qalandiya checkpoint.  But for most, remote learning has been challenging. Many students suffer with lack of access to both computer equipment and internet which hinders their ability to work through class tests and exams conducted online.

Birzeit University is a private institution which relies heavily on student fees.  With Covid-19 hitting an already beleaguered economy, overall student enrolment has declined, meaning some universities in the oPt have had to cut staff salaries in order to keep functioning. At Birzeit University staff costs represent around 80-85% of total expenditure.  For sufficient numbers of students to be able to enrol for the universities to continue to operate, there will need to be greater student financial support available.

These increasing financial hardships come in the wider context of rising unemployment if the pandemic cannot be controlled.  International donors have doubled payments to support the Palestinian Ministry of Social Development to pay social aid to the most vulnerable families.  But with the strain on paying public sector salaries, many families affected will be less able to support their children to go to university.

In recent weeks, the pandemic took a turn for the worse in Palestine.  As summer ended, the numbers of cases shot up, with a total of almost 56,000, now confirmed in the West Bank alone and over 4,000 cases in the Gaza strip.  In the West Bank the Palestinian Authority has responded by closing schools which had started to open up.

As well as contending with the destructive economic impact of the pandemic, existing and new students have to face growing threats to their personal and collective security.  In the early part of the pandemic in Palestine, Birzeit University confirmed that 21 students and one staff member were arrested by the Israeli military.  More than 80 Birzeit students are now being held in administrative detention, often taken from their family homes with no coronavirus precautions in place.  These students are often being held, without charge or trial, in Israeli prisons where the virus can spread easily.

Despite all the challenges, among staff and students, the determination to continue teaching and learning remains strong.