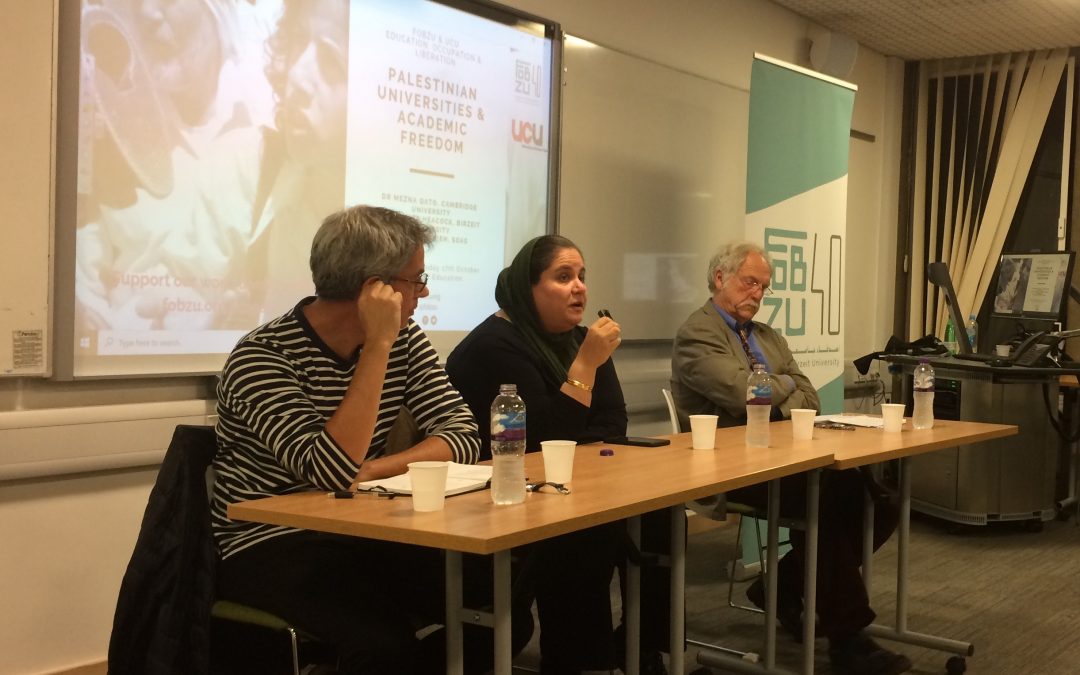 On 17th October Fobzu held the third event in the Education, Occupation & Liberation programme on the topic of ‘Palestinian universities under occupation and academic freedom’. The panel discussion held at the Institute of Education drew a large audience of academics, students and members of the public.

This timely event was held a week after Fobzu issued a joint letter with UK education unions calling on the Foreign Office to stand up for Palestinian higher education. The letter, signed by leaders of UCU, NEU, NASUWT, EIS and UNISON, condemned the increase in repressive actions taken by Israel restricting access to education in the oPt and urged the UK government to take action to uphold the Palestinian right to education and academic freedom.

Dr Mezna Qato, an historian of Palestinian education at King’s College, Cambridge and Fobzu trustee, opened the discussion by detailing historical restrictive policies towards Palestinian education that have been adopted by colonial powers, Arab states and international regimes over the past century. Under the British Mandate education became a tool of colonial rule while at the same time, schools and colleges were targeted with raids, closures and demolitions, practices that continue under Israeli occupation today.

Professor Roger Heacock had taught at Birzeit University for 35 years before occupation authorities failed to renew his visa earlier this year, when he became one of 15 foreign passport-holding faculty facing visa refusals or severe delays to renewal. Professor Heacock placed these recent measures in the wider context of increasing restrictions imposed by Israel on access to the oPt and the longer-term policy adopted by Israel to fragment occupied Palestine, undermining the national character of Palestinian institutions and isolating them internationally. Professor Heacock argued these measures were a response to the resurgence of popular mobilisation undertaken by Palestinians, in particular, the Great March of Return in Gaza. Combined with the actions taken by the Trump administration in the US aimed at dismantling UNRWA and undermining the international legal framework governing Palestine, the Palestinians were facing a historic assault on their rights.

Dr Adam Hanieh, Reader in Development Studies at SOAS, argued that one of the reasons universities in the oPt were targeted by the occupation authorities was the important civic role they play in Palestinian society. Since their emergence in the late 1970s, Palestinian universities had been active sites of political engagement for students and staff. Institutions such as Birzeit University had provided a critical arena for civic participation, with Palestinian students and academics gathering from across the West Bank, Gaza and inside Israel. The policies of geographic fragmentation and closure that had accelerated in the last two decades, however, were increasingly transforming Palestinian universities into local institutions, undermining their national reach. This is why, Dr Hanieh concluded, solidarity between UK students and academics with their Palestinian colleagues is more urgent now than ever.

A video recording of this event is available here: https://youtu.be/pzPURN6ZNSI